Tri in the Grove

Did my first open water swim this weekend, and my second triathlon. It ended up being awesome! 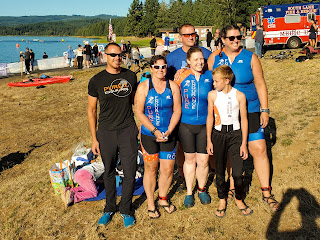 Drove to Cottage Grove Lake for Tri in the Grove. There was a sprint and olympic option as well as variations at each distance. I chose the sprint tri. 750 meter swim, bike 13 miles, and run 3.1 miles. I wasn’t sure if Ron would be able to come along as he wasn’t feeling well this week, but he felt better on Saturday and was there to cheer me on and help me with all my gear. I’m so glad he was able to go. We saw fellow cyclist, Ken B. directing traffic, and later Ron saw him in the duathlon. 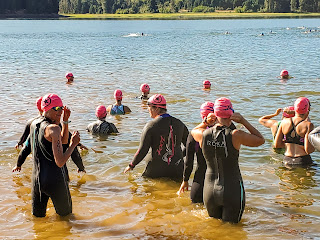 My coach, Jon Booth of Pure Endurance was there with his son Logan who was doing the sprint, and I think it may have been his first open water swim as well. Very inspiring to see kids get involved in this sport. My other teammates, Lisa, Joe, Kelli, Cathy, Kathryn (did I get everyone?) and I participated. I think most of us did the sprint, distance but a couple did the Olympic.

With everything going on, I'm in distraction overload. Later at a running store the clerk called it race brain. Apparently a well known phenomenon.

Jon helped me get my wetsuit on correctly, which was great as I didn’t have breathing issues at all on the swim. Awesome! I hadn't been getting it pulled up high enough, but with it properly fitted I could breathe - Yay! My teammate, Lisa, promised to stay with me for the swim. It was reassuring to have someone close by, but I felt bad taking away from her race. She assured me it was fine. Thanks Lisa! It was great to have the support, and a friend close by.

Swim
The swim start was crowded, but not overly so. Not nearly as bad as I had envisioned it would be. And while I kept my head above water while we were bunched up soon the crowds thinned and I could put my face into the water and swim. I lost Lisa a few times in the sea of pink caps, but was able to find her again. Great pace. I didn’t need but the briefest of breaks a couple of times. Tried side stroke, but eventually figured out that just doing a front crawl with no kicking was a better recovery and quicker. Got off course quite often, and at times had trouble spotting the buoys, but was able to follow Lisa whenever I felt too lost. The course looks different once you're in the water. 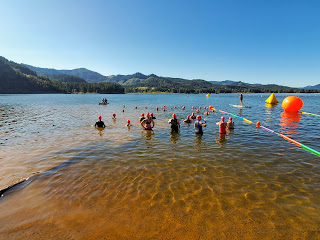 We passed at least one blue cap and several others pink caps (blues had started earlier). Lisa said we passed several blue caps - a whole group at the finish. That’s always a mental boost!

Did I mention it's kind of hard to walk right after a swim.

Finished the swim in 22:32 minutes. I thought it would take me much longer so I’m quite pleased with the time. Also No panic!! That pleases me even more. I had worried about panicking after what happened with Beaver Freezer, and the few times I'd been in open water practice, I had felt breathless and panicky. I now know that was more from the wetsuit not being pulled up enough. Really happy to have that resolved.

Bike
The easy part for me. I was winded a bit going out, but not terribly so. I knew I needed to slow down at some point, get some nutrition and settle into a sustainable pace. I felt fast on the course, pushing it a bit, but not maxed out. It is a fast course with no steep climbs. I had tailwind in my bottle and ate a gel along the way, so about 300 additional calories.

I figured biking was my best place to gain an edge. At Beaver Freezer, I held back a bit on the bike, trying to save my legs for the race. But my legs are less a problem on the run than my cardio fitness. I decided to push harder on the bike, and run/walk the run. I’d be doing so anyway, and while I might be a little slower I’d make up for it with a fast ride. The strategy seemed to work okay. My run wasn’t much slower than expected, actually pretty close to what I normally do.

Logan bike in to T2

Cathy Bike in to T2

I had a great time riding the 15 mph corner. Perhaps some motorcycling skills here? I gained enough momentum to pass another rider, who took it slower. Ok, that was a little bit fun!
Bike time 51:47

Run
Walk/run for the win. Of course I tried to time running with the photographers on the course, and at the finish. Gotta look good in the pics. More or less I ran 50 steps then walked 50 throughout the course. It worked well keeping my cardio in a good place. Funny how much longer 3 miles feel after a swim and a ride!

So much fun having a cheering crowd! Such a motivator! Also because the run was an out and back, seeing other runners and teammates along the way was added fun and a great boost.
Run time 48:08
Time overall: 2:07:48

Placed 2nd (out of two-ha!) in my age group. Won a pint glass. Didn’t see that coming. Kelly, Joe, Logan, and Cathy also placed. And Ken B. for the duathlon. There may have been others, but those were the ones I saw, or that Ron captured in a photo.


Felt strong the whole race, except a little tired on the run. I did use my inhaler on the run as my chest felt a little tight, but didn’t have any issues with asthma otherwise. Got a finisher medal. My first. Cool!


I didn’t realize how much I like sprints. I’ve always been more of a long distance girl. At least in cycling. I enjoyed being able to push hard and not have to hold back and save energy for the long haul. There wouldn’t be a long haul today. Just 3 short hauls. :)

I’m so glad I decided to do this one. I hadn’t planned to. Didn’t feel I was ready for it, but with encouragement from my coach, and support from fellow teammates, I took the plunge - literally. Terrified and had that "what did I get myself into" moment. 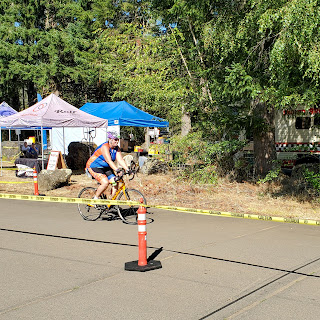 Thanks to all my teammates and coach Jon for the encouragement to give it a shot. It went better than I ever dreamed. And thanks to my husband Ron, giving up a day to cheer me on and shlep all my gear.

Already signed up for Best in the West in September!


The boring details:
If you’ve come this far, you may want to quit here. The rest is just my futzing over the minutiae.


Wetsuit
I wasn’t getting it on nearly high enough. Jon worked it up higher getting the arms up higher on the shoulder, and the chest area much higher. I think the neck front was up to my chin, but it settled down nicely once in the water. Never felt the least bit constricted at any point. That was fantastic. Never once felt panicked. Awesome!

Bravo, Kari. You have my deepest respect to pull through with this event. I wonder where this journey might take you in a few months or years... ;-)

Thanks Sonja. I’m slow but had fun. I don’t have any big aspirations for this. Just trying to stay healthy and have fun. 🙂

Wow! What an accomplishment! I don’t think I would have lasted through the swim let alone the rest.

Thanks Richard, lol, I wasn't sure I would survive the swim. It was my biggest worry!