With a desire to post something motorbike related, I had a choice between picking some old photo and making a quick post, or dig up an old ride report that never made it to the blog. I opted for  the ride report, our Redwoods tour back in 2008. This was our first tour and I'd only been riding a few months at this point. Ron had ridden long ago, back in the ancient of days, so he was a returning rider, but it was all pretty new for him too. Hope it's not too boring or long. I've split into a couple of posts, so will finish up another night.

We don’t have many pics from the start of the ride. We hadn’t acquired the “shoot photos while riding” technique yet, and I for one hate to stop once I get going. I don’t even remember the first part of the ride, but we headed over highway 126 from Eugene Oregon to Florence and from there we went south down the Hwy 101. We spent the night at a motel either in Port Orford or Gold Beach. Spousal recall varies.

Since we’ve been on the coast we’ve been riding in the fog for the most part, but the next day we finally get a chance for photos. We stopped at Samuel Boardman State Park for the requisite picture of Arch rock, and to walk around a bit and enjoy the views.
We crossed the border into California, diligently watching out for crazy, lane-splittin’, Californians. (We never did see any.) Lunch was at a Subway in Crescent City. Then back on the road to what must be one of the cheesier stops in the area 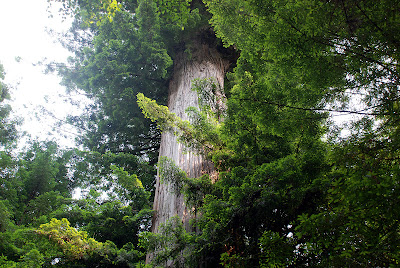 We spent the second night in McKinleyville. We were surrounded by forest fires, and that was one reason we didn’t explore too many other routes. A number of roads were closed, or could close behind us. We never got into any smoke though, until we were back in Oregon. McKinleyville was as far south as we went. The next day we headed back the way we came. We stopped at more places and hiked several trails. 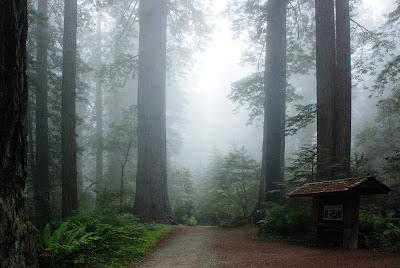 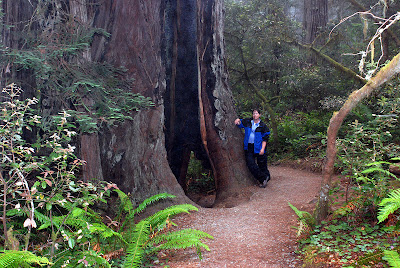 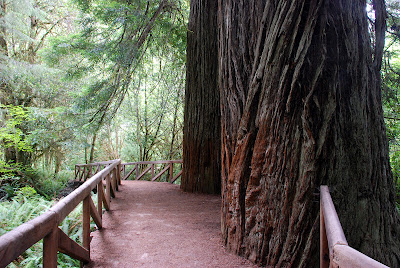 We spent the 3rd night at Crescent City. We went for a nice walk on the beach, and after dinner we strolled around town. We took…count them…ONE photo. The view from our motel window. 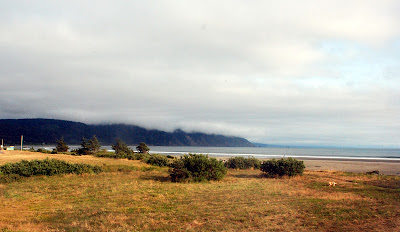 The next day we rode out Highway 199 back into Oregon. More of the same: Stop for big trees; stop for trails. Decided to include the bikes in a couple of the photos... 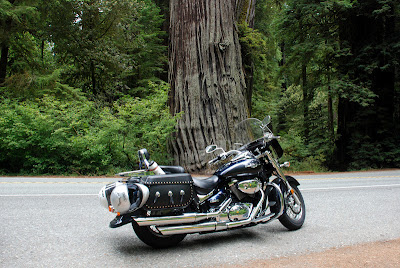 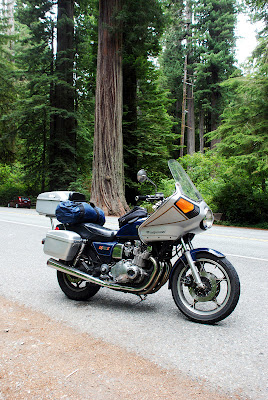 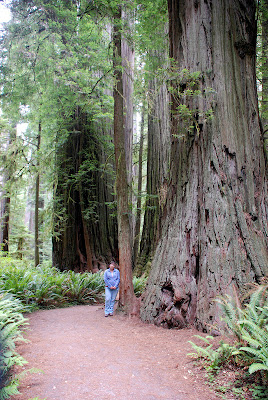 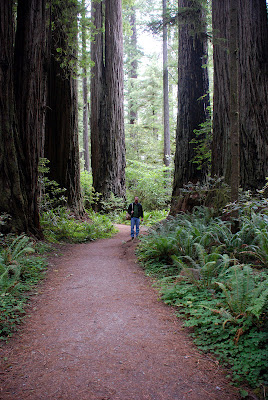 I am glad you decided to post this trip. It looks like a lovely outing. Has this big intimidating cruiser been your bike? It's huge. How did you manage?
I just love the mist in the forest. Great atmosphere. Very much looking forward to the next part of your story. Thank you for taking the time to write it down and share with us.

Bluekat great post! I camped In Florence in 1996. The coast was spectacular, I want to ride my bike down that way sometime soon. Breath taking! Beautiful pictures! I can hardly wait for the rest of it! Wow the C50 is huge, I find the 500 enough to handle. I bet though it cruises down the highway superbly.

Awesome! I think we followed your route in 2009. Funny how we all stop at the Trees of Mystery. Nothing like a couple hours of hiking in riding boots. I did enjoy hugging the trees though.

We too stayed in Crescent City and went home via 199 then hit I-5 at Grants Pass. It was only an overnighter, but a lot of miles two up on the America.

I thought you "LOST" the Redwoods Ride Photos ? That C50 is humungous but is probably very smooth. I recognize the Pre-Princess . . . We were in Crescent City a long time ago in our "vette and I think we ate at the Dairy Queen. We came from Cave Junction (Oregon Caves), then headed up the Oregon Coast but it was too foggy and we headed east from Newport.

i love avenue of the giants area, i had the good fortune of having an uncle in town and would ride up (lol) to visit often. next time come south :)

Yes, that is my Suzuki I had just before I bought Sam. It was an 800cc engine, and was about 150 lbs heavier than Sam. Kind of big and heavy, but very comfy for touring. She had a low center of gravity, so not too much of a handful.

Thanks Dar. It was my first trip to the Southern Oregon Coast and the Redwoods. The C50 was great on the highway, very comfortable and smooth. Heavy enough that the wind didn't blow me around so much. As a new rider, the size kind of intimidated me, but it wasn't too bad.

Actually, now that I think about it, that trip did a lot to help me get used to the bigger bike.

My son has a Yamaha 1100 that feels similar. Big, but not as much of a handful as you'd expect. I think it's their low center of gravity that helps.

ah! - That must be the photo Troubadour posted today. :)
I was in hiking boots for riding, so actually that worked out well.

That is a lot of miles for overnight. We kept our days fairly short since we were sure what we were capable of.

I so want to go back and go farther south. There was so much we missed, and so much more we want to explore!

Gorgeous photos. Looks like a great trip. And great for going on it just after picking up riding.

Thanks
The trip was incentive to learn to ride.

I love the Suzuki C50, my wife loves it too but we can't buy anything now, in saving mode. This post brings back memories of my trip, Crescent City, the California coast and even Trees of Mystery, yea, it was really cheesy ;-)

The Suzuki is a nice bike and comfortable for touring. I love the Redwoods, the scenery and the trees are stunning.

PS Just wanted to let you there was a double post, so I deleted one. Didn't want you to think I was giving you the boot out of the blog! :)
Thanks for stopping by!