Could've swore I posted this earlier, but this is a ride from October. I think it's my favorite gravel ride this year.

It was a five star epic day!

Camp Sherman gravel has been calling. We parked near the Camp Sherman store, unloaded the bikes and headed back on the road we came in on. Soon enough we found the trailhead for our connector trail. I've scouted this trail about a year ago. It's relatively flat and easy to ride with my 35mm tires. I knew we had to find the connection out to the road, but while there were a couple of options -- very unused dirt roads, I never figured out the correct one. We took the trail until it hit the main road and back tracked a few hundred feet to our next turn off.

From here it will be dirt and gravel roads. And climbing. Also from here on out, it was virgin territory. I'd not scouted this portion, and many of the the old roads were not marked. I wasn't altogether sure we'd find the right one. We headed up with few views and sounds from the highway somewhere below. Finally I rounded a corner to this view...

This right here made the whole ride worth it even if nothing else epic happened. Turning around I could see Black Butte in the background. 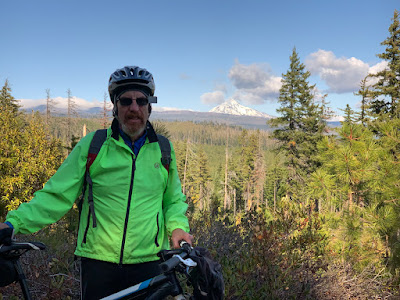 As we continued up to Round Lake the road leveled off somewhat and it felt like we should be getting close. Clouds had gathered and we noticed  bits of white falling from the sky. A very dry sleet, a light dusting at this point, began to fall. Ron was worried about the downturn in weather, but I felt sure we were close to Round Lake and that from there it would be a quick downhill back to better weather. As we rolled along and clouds scudded by, I started to think, maybe we aren't close. I'm mean, I've never been here, so ... We passed a road that pointed to a church camp down the way. Ah! Now I knew we were close.

Round Lake isn't right on the road, you have to take a dirt road down to it's shore. Of course now the beautiful view of Three Fingered Jack was slightly obscured by the clouds. A couple were camping near the lake in their Eurovan. They had the place to themselves excepting for a few day visitors. We chatted with a group that drove up for the day, snapped a pic of the lake then turned to head back down to Camp Sherman.

Not five minutes after leaving the lake the skies cleared and Three Fingered Jack was in full view. Why couldn't it have done that at the lake?


Epic downhill! There was plenty of washboard sections. They're hard to spot when flying along, so not much warning before you hit them. I was wondering if carbon road bikes explode on this kind of stuff. Best not to think about it. I think I gained some bike handling skills on this ride. And the Domane performed flawlessly. Who says a Domane can’t be a gravel grinder!?

We returned via the same trail we rode out on and loaded up the bikes. Stopped into to Camp Sherman Store for giant deli sandwiches and goodies on the go. This country store is awesome. Don't pass it up if you're in the area. As an aside, they have good gluten free bread, if you're gluten-free.

Ran into some snow at the top of the pass. Glad we weren’t up at the lake then. I wondered how it was going for the campers up at the lake.

Once we were down from the summit things cleared up and the return home was uneventful.

Wow, Kari Spectacular views, and all that uphill cycling... respect!

Thanks Sonja :)
We had all day to wind our way up the hill with lots of stopping "to smell the roses" That made the challenge easier.